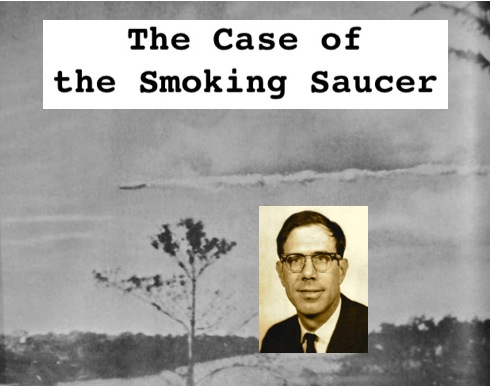 Jim Moseley’s early flying saucer days were interrupted by frequent visits to Peru for treasure hunting, or vice versa. During a trip there in May 1954, Jim met a man, Pedro Bardi Zeña, who had  a dramatic story and a unique photograph of a flying saucer. Bardi told him of a UFO that left a distinctive trail of vapor or smoke as it streaked across the jungle sky.

The story and photo was first published in the US in the April 1955 issue of Saucer News  (then known as Nexus).

NICAP (the National Investigations Committee on Aerial Phenomena), while reporting on a similar UFO report, checked with Jim on the Peru photo and the details behind it:

NICAP believes members may be interested in the accompanying picture supposed to have been made of a smoke-trailing object over Peru in 1952. The photograph and extracts from the sighting report are reproduced with the kind permission of James Moseley, editor of SAUCER NEWS.

In a letter dated August 10, 1957, Mr. Moseley gave NICAP the following account of the incident:

“In Lima I met Señor Pedro Bardi, who is an agricultural engineer. On July 19, 1952, while on a farm in the Madre de Dios section of Peru, he and others saw a saucer. It was about 4:30 p.m. and they were talking to Lima by radio.

“Suddenly, according to Bardi, the radio went dead. They looked out the window and saw a round object going by at high speed. (The witnesses included Pedro Arellano, owner of the farm.) The object such had passed; it was at an estimated 100 meters altitude and was a little smaller than a DC-3, according to Bardi. It made a buzzing sound as it went by.”

The object’s speed, Moseley explains, was determined by a report that it was seen four minutes later near Porto Maldonado, 120 kilometers distant. This speed was computed at 1117 miles per hour.

The photograph was secured from a customs administrator named Domlngo Troncosco, who said he had taken it as the object flew near the port. Though the photo shows a cigar-shaped object instead of the round shape Bardi described, this could possibly have been due to an elongated effect caused by speed.

“It seems obvious to me,” Moseley told NICAP, “that the photo is genuine. Incidentally, I (strongly doubt) if this particular saucer was anything but earth-made.”

Though NICAP has no reason to doubt the picture’s authenticity, we are unable to make an accurate analysis without the negative. NICAP’s UFO Investigator, Vol.1 #2, Aug/Sept.1957

What Jim and NICAP did not know, was that Project Blue Book already had a file on this case. Jim accurately repeated information given to him, but some details he had were inaccurate. There was a newspaper story on it, and even some degree of official investigation.

The photo was not from 1952, but taken in July 1951. The  report by Col. McHenry Hamilton Jr., states that the Peruvian Air Force mentions a total of three photographs, supposedly taken by different individuals, and that it was their opinion that it was hoaxed with “a fairly clever attempt at trick photography” for “commercial reasons.”

That’s very interesting for several reasons, but chiefly for the mention of additional photos, which have not been seen since.

Did Jim get conned? Bardi had heard of Jim’s interest in flying saucers, which is the reason he sought him out and brought the story and photograph to him. Jim was given no reason to doubt Bard, the picture, or the details of the story. He went on to present the material just as he’d received it, and few have ever given serious question to the authenticity of the photo itself.

The biggest exposure the photo received was in the Flying Saucers Look Magazine Special, 1967. The full page photo appeared with only a brief caption in tiny print, where it credits Saucer News for the picture. This magazine was a mainstream publication that reached millions of readers.

The picture has continued to receive exposure world-wide, frequently reprinted, often  without attribution, and in a cropped form. It’s been seen in countless UFO books, publications, websites and documentaries.

The story picked up some twists over the years. The smoky trail behind the UFO had evolved into something more exotic. In an Open Minds article by Antonio Huneeus, Jim was disturbed to find references to “angel hair,” the silky ephemeral substance that was once associated with flying saucers. Jim wrote me, “The photo with commentary, is in the December – January 2012 Open Minds. In all these years, I have not heard of any other source of info on this photo except me. Yet their commentary contains additional material that I am quite sure is false!”

It was this “angel hair” article that prompted Jim to ask me if I could track down additional information on the photo. The report I prepared for him ultimately became the foundation for this article.

Jim was insulted in 2012, when Michael Swords, in  trying to sort out the photo’s history,  questioned its authenticity due to Jim’s reputation as a prankster over the years: 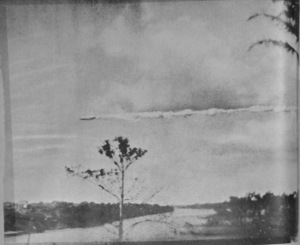 This picture seems to have reached the American public via James Moseley. That fact is almost enough to make you quit bothering right there. Moseley, however, nice a guy he may or may not be, has spent a life fouling the waters of UFOlogy with hoaxes, misrepresentations, rumors, misplaced “humor” … it has been an almost wholly unhelpful “career” to the field.

Apparently, Swords’ prejudice against Jim prevented him from making any attempt to contact Jim to find out more about the photo. Jim considered responding to Swords’ sore-headed misrepresentations and rumors, but decided to quit bothering right there.

The Smoking Saucer Flies On

“My picture,” is what Jim called the Peru saucer photograph, and he was proud to have introduced it to flying saucer study. He always thought the photo was genuine, but that it was likely just pictured an aircraft of earthly origin.

I think Jim would have been happy to know that there’s still interest in the photo, and that more information on it is coming to light.

Chronology of Publications and Examinations

Special thanks to Vicente-Juan Ballester Olmos for the information on which this list is based.

Michael Swords, Can we learn anything from UFO Photos?