George Adamski, R.E. Straith and the Seven Letters of Mischief 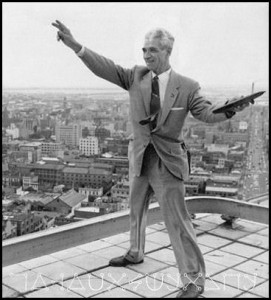 George Adamski became a major flying saucer celebrity after the release of his 1953 book, Flying Saucers Have Landed, where he told the story of encountering and communicating with Orthon, the pilot of a landed extraterrestrial spaceship. He later produced movies and still photographs and continued to have contact and adventures with the visitors from space.  His success seemed to inspire a group of similar claimants, who became known as the Contactees.

Not everyone swallowed the stories. Upstart flying saucer magazine publisher James W. Moseley had interviewed Adamski in 1953, and had not been convinced.  In his Saucer News magazine, he published articles critically examining Adamski’s stories and photographs, and in October 1957 published a special “Adamski exposé” issue of Saucer News.

George Adamski continued his celebrity status and following. Just as word of his fakery was spreading, a letter of support from an unlikely source entered the picture.

In December1957, Adamski received a letter from R.E. Straith of the” Cultural Exchange Committee,” that stated that the US Government could not officially endorse him, but privately offered their support. Straith and his agency could not be located for verification, but Adamski and his followers proudly displayed the letter was evidence of his credibility. 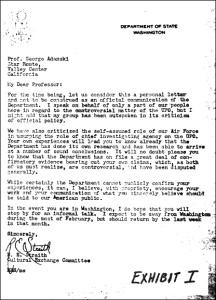 The letter was controversial, and its origin was a mystery, but the puzzle was compounded even further by the fact that there were other mysterious letters sent to UFO researchers…

THE STRAITH LETTER- And Then There Were Three

For about six months now, there has been a minor controversy in UAO circles centering around two letters mailed in Washington, D. C. during December, 1957.
We think it might help clear the muddy waters at this time to  is close that there is a third letter involved. The first is the so-called “Straith” letter post-marked December 6th. It is addressed to one
G. Adamski and purports to be an unofficial endorsement of his particular “space-visitors” dogma from official circles.
The second, post-marked December 16, was directed to C. S. I. New York and was a clear attempt to cause dissension among its major officers through inference of collusion and conspiracy on the
part of one of them.
The third, post-marked December 16, was addressed to C. E. Lorenzen, of APRO. It pleaded with our director to suspend operations for about three months because “the department is going to crack down on major UFO publications and yours is on the list.” Although not specifically stated, the inference was that the postal department was “the department” concerned.
From C. S. I., we learned that their letter and G. A.’s were typed on the same typewriter. We borrowed a photostat of C. S. I.’s letter and through microscopic comparison learned that again the same
typewriter was involved. Consulting our handwriting expert, we find that the signatures on the G. A. and C. S. I. letters were drawn rather than written (APRO’s was not signed).
The idea that this is part of some official plan to cripple or discredit UAO investigators and saucer cultists can be dismissed quite readily since it is obviously the work of an amateur. At first glance, however, the motivations of this amateur seem rather nebulous. He might
be an Adamski disciple intent on crippling opposition to his new-found faith while bolstering it with quasi-official endorsement. It seems more likely, however, that the writer intended for G. A.’s
letter to eventually be publicly discredited.
There are several devices included which make discrediting easy-for
instance, the full name and identification of its purported author are included.
So it appears that the writer was out to get George indirectly, taking advantage of his extreme gullibility where support of any phase of his archetypal “wise old man” possession is concerned.
His claims that (1) there is a cultural exchange committee (it’s now called cultural exchange program) and (2) that government seals are carefully guarded are pure naivette. Ask anyone who’s worked in a civil service office about the latter claim. Also-a cultural exchange committee would have its own letterhead.
Or the other hand, it seems to us that C. S. I. and APRO are prototypes of the few groups who have approached the UAO problem with non-sensational objectivity- and he seems to be “out to get us” as well.
What sort of individual could benefit from publicly embarrassing G. A. and sabotaging the activities of serious investigators simultaneously? We can think of only one answer-a competitor!
Any further attention given this tempest in a teapot only serves to detract from our real work.
At this point we can only draw two conclusions: (1) Whatever the anonymous writer may have been attempting, he failed. (2) That boy is sick!
– – –
It turned out that there were even more letters than the three APRO knew about: 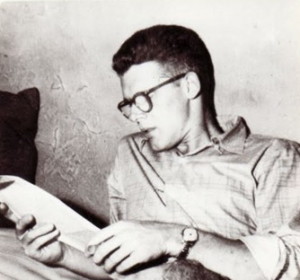 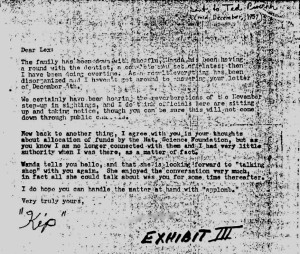 To Lex Mebane/Ted Bloecher of CSI 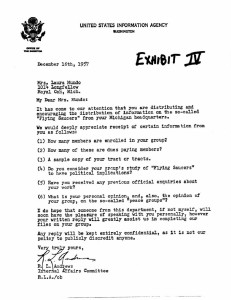 To Laura Mundo, director of the Planetary Center (an Adamski supporter)

The Cat Leaves the Bag 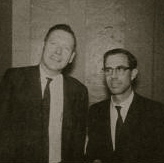 Older and wiser: the perps in 1967
For over a quarter of a century, the controversy caused much speculation on who created these letters and why. On Dec. 6, 1984, Gray Barker, one of the chief suspects died.  The next month, his friend, Jim Moseley revealed the truth in Saucer Smear January 10, 1985:

“Just a few months before Gray Barker’s untimely death, your editor told him (again) that we intended to confess to the ‘R.E. Straith’ hoax if he were to die ahead of us.” Jim went on to say, that he used to visit Gray Barker at his home in “…Clarksburg West Virginia for a weekend every few months – i.e., whenever it fitted in with our mutual schedules. On one particular occasion in I957, a young friend of Barker’s… provided a packet of genuine official stationary from various Government agencies. …Barker and I wrote not one but seven (count them!) naughty letters that evening emboldened by the the evil of alcohol and fully enjoying the hilarity of this chance to throw long-term confusion into the UFO field.”

(For the full text of this article, see Robert Sheaffer’s correspondence with Gray Barker (1925-1984)  )

Did it work? According to UFO historian Jerome Clark:

All over the world Adamski’s followers were claiming vindication. South African UFO enthusiast Edgar Sievers declared the letter to be a “decisive document on imminent developments on this planet.” Wilbert B. Smith, a Canadian radio engineer who earlier had been involved in an official UFO project, told [Donald E.] Keyhoe, after the latter expressed skepticism about the document, that he “knew” the Straith letter to be authentic, because someone of his acquaintance knew the man personally. Straith was working in a “supersecret agency partly under State Department control.” C. A. Honey stated flatly that through his and Adamski’s efforts, “Straith was located.” More than two decades later, looking back on the controversy, [Lou] Zinsstag and [Timothy] Good concluded that while “much of the evidence is circumstantial … on balance there is more in favor of the letter[‘s] being genuine.”

In Jim Moseley’s memoirs, Shockingly Close to the Truth, he explained more about the seven letters and their seven targets:

“One of these, on U.S. Information Agency stationery, went to Laura Mundo, a longtime fan and booster of George Adamski. Another, on a different organization’s letterhead, went to APRO’s Coral Lorenzen. Still another, signed by ‘A. G. Matthews, Chief, Liaison, Internal Affiairs’ (of what agency I don’t recall and the surviving carbon doesn’t reveal), went to Manon Darlaine, the Hollywood saucer enthusiast whom I had met in 1953. It thanked Darlaine for her ‘generous cooperation and employment of  . . . [her] valuable time when Mr. Mosley [sic] visited you during his recent assignment to your region.’ The fourth went to someone in the inner circle of Civilian Saucer Intelligence of New York —probably Isabel Davis, Ted Bloecher, or Lex Mebane. One more was addressed to a semi-leading light in The Field whom I no longer recall. The sixth on National War College letterhead, was addressed to my father, a retired U.S. Army general. It objected to his having indulged in extreme right-wing political activities while on a military pension, strongly implying he might lose the latter if he did not refrain from the former. The seventh was the Straith letter… ”

The FBI even got involved trying to track down the origin of the bogus letters, nevertheless, Adamski kept claiming the letter was genuine. When asked about how the impact and how story changed over the years, Moseley replied:

“It didn’t really evolve. It was just etched in stone. It was hilarious. People would write or telephone the State Department and ask for R. E. Straith. And the State Dept. fed into the legend, stupidly, without realizing it. They always gave a different answer. ‘R.E. Straith was not available’ or ‘he was on a different assignment’ or ‘he didn’t exist.’ If they sent something by mail, it was sent back ‘refused – person not known’ or not sent back at all. There was no consistency in how they handled it and that fed the fire and kept it going.” (Shavertron, 2009)

The letters were a drunken prank by Moseley and Barker, and they don’t appear to have fooled anyone for long, even George Adamski. But, in Adamski’s hands, he was able to use the letter as a prop to bolster his tales of being an ambassador to Venus. It was this use that elevates the “Straith Letter” to the status of a hoax!

There was one letter though, that was never published, the un-mailed one to General Moseley. It was thrown away…but there was a carbon copy…  So as epilogue:
From out of the treasures of THE GRAY BARKER UFO COLLECTION, the world premiere of the 7th “Straith Letter:” 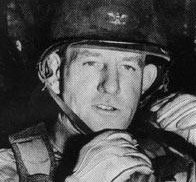 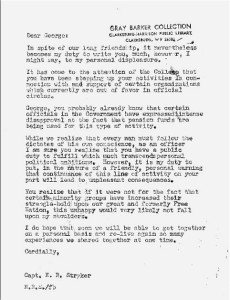 A special thanks to David Houchin of  The Gray Barker UFO Collection  located at the Clarksburg-Harrison Public Library in  Clarksburg, West Virginia for locating the Gen. Moseley letter.
More on George Adamski
GAF: the George Adamski Foundation
PROFILES IN PSEUDOSCIENCE: GEORGE ADAMSKI!

2 thoughts on “George Adamski, R.E. Straith and the Seven Letters of Mischief”